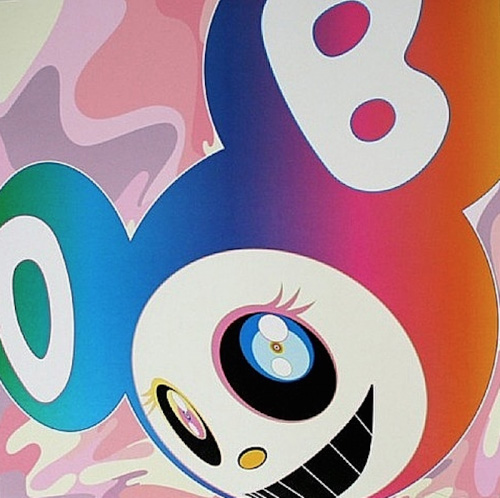 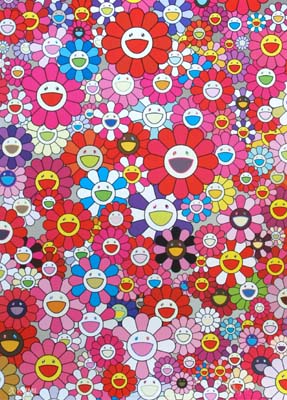 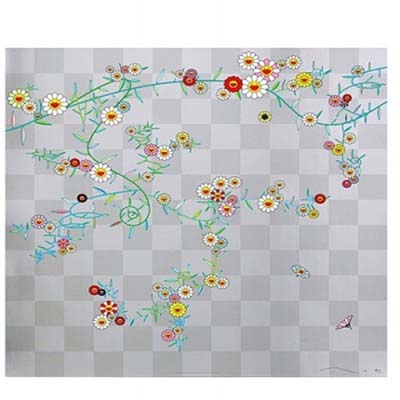 The artist Takashi Murakami, born in Tokyo in 1992, studied Japanese „Nihonga painting“, which is cultivated in the country’s tradition, at the renowned „Tokyo National University of Fine Arts and Music“ until 1993.

As a contemporary, Takashi Murakami recognized that his imagery lay more within „otaku culture“, popular manga and anime imagery. Under the generic term POKU (for pop and otaku), the artist quickly found his own style, which he dubbed „Superflat“.

In Takashi Murakamis works we find what one might call a „corporate design“, an unmistakable style of the time that characterizes his paintings, sculptures and graphics.
Clear outlines, trendy selection of motifs, no shadows or artificial light and shadow tightening, this is how Murakami creates his own pictorial worlds that magically attract everyone’s attention and imprint themselves on the memory of our pictorial world.

His brightly colored and trendy graphics have won over the international art scene. Coming from digital art and practical art from Japanese comic culture, Murakami’s artworks soon established themselves as international „high art“, so that the artist, with his colourful, clear artworks, became one of the most sought-after artists of contemporary art.

Takashi Murakami lives and works in Japan (Saitama, Asaka) and in the United States of America (Brooklyn – New York)