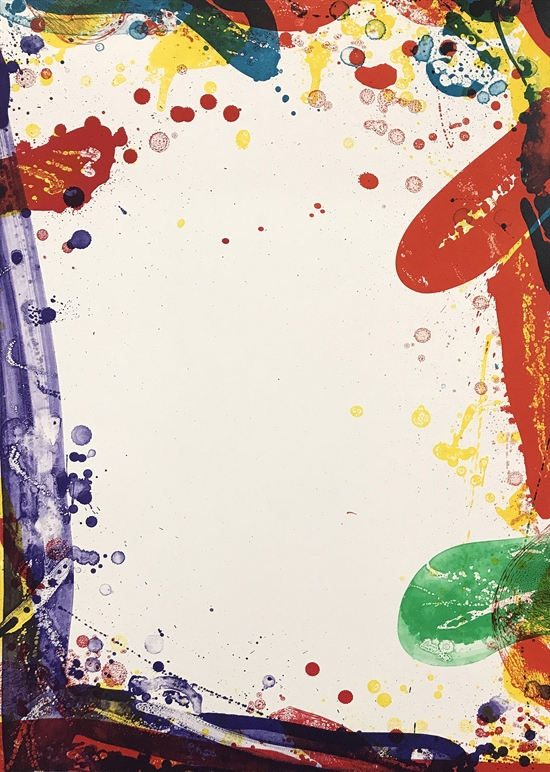 Sam Francis is one of the internationally leading artists of the so-called second generation of Abstract Expressionism.

Sam Francis was impressed when he observed fellow artist Jackson Pollock (1912 – 1956), who in his well-known “Drip Paintings” poured, dripped or splashed the colors onto the picture carrier. Through his technique Pollock freed his compositions from the line.

Sam Francis came into contact with many artists, art techniques and painting styles on his many international travels. Everything served to inspire the artist towards his own expression.

In the 1950s, Sam Francis stayed in Paris, where he encountered European Art Informel (non-geometric and non-representational painting). At times he belonged to the so-called Art Informel movement, which had emerged from Surrealism.

By dealing with all these art styles and artist colleagues, Sam Francis came to his artistic expression in „action painting“.

Since the 1970s, Sam Francis was the master of action painting

Sam Francis was among the founding curators of the Los Angeles Museum of Contemporary Art.

The Absence of Emptiness and Painterly Presence in Sam Francis Etchings, Lithographs and Monotypes

In his Action Painting, the artist Sam Francis was always fascinated by all the possibilities that etching, lithography and monotype offered him.

Sam Francis was a great graphic artist and owner of the famous Litho Shop’s in Santa Monica (Los Angeles).

His mostly colorful works of art, which always give space to emptiness – according to the principles of Zen Buddhism – are full of artistic energy, liveliness and joie de vivre.

Starting from the well-known basic colors, Sam Francis combined gemstone-colored, almost glassy, ​​translucent color elements that appear to have been randomly dribbled, rolled or sprayed and are decentralized and pushed to the edges to form a complex visual language.

As the founder of The Lapis Press, Sam Francis knew how to model visual elements in text progressions.

150 smaller works of art from the last year of Sam Francis life are a sign of his overflowing and tireless creativity.

You are welcome to contact us if you are looking for or would like to purchase works of art by the artist Sam Francis.

For further information the artworks by Sam Francis or if you have any questions please do not hesitate to contact us.