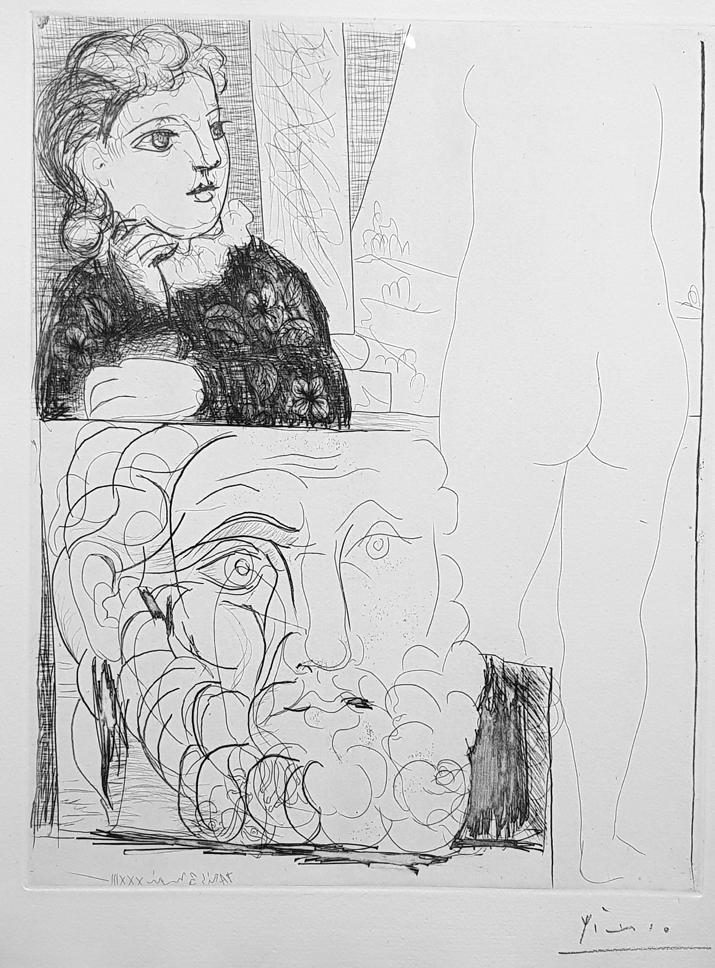 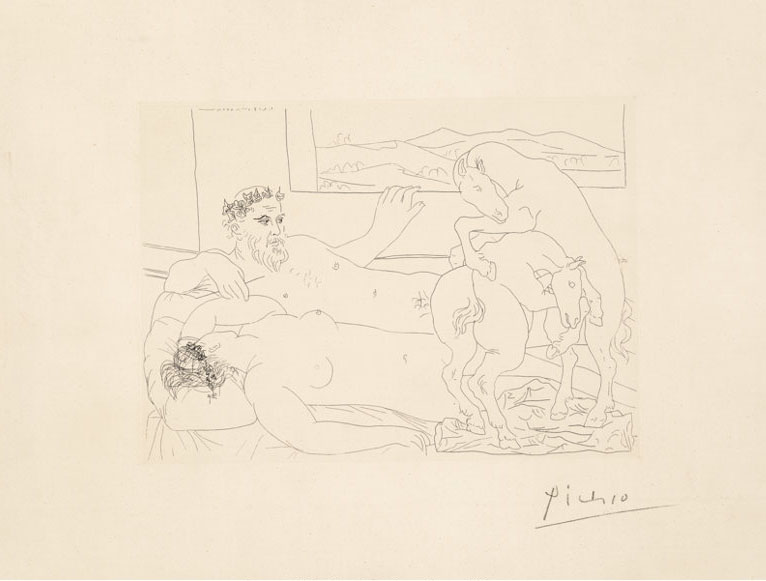 The Spanish painter, sculptor and graphic artist Pablo Picasso left behind a comprehensive oeuvre of drawings, graphics, collages, paintings, ceramics and sculptures. Picasso’s best-known works include the paintings “Demoiselles d’Avignon” (1907) and “Guernica” (1937) – as key works of Classical Modernism – as an artistic exploration of the Spanish Civil War.

Picasso was born in Malaga in 1881. In 1895 the family moved to Barcelona. At the age of 14 he passed the admission to the art academy “La Llotja” and was allowed to skip two classes. After only a year he moved into a joint studio with Manuel Pallarès.

In 1897 Picasso went to Madrid to study at the „Royal Academy of San Fernando“.

The Prado and the artist’s bars in the capital became his school.

In 1900 Picasso had his first exhibition entitled „Els Quatre Gats“. In the same year he traveled with Casagemas to the world exhibition in Paris, where the works of Edgar Degas, Paul Cézanne, and Pierre Bonnard could be seen. From then on, the artist shared a studio with Casagemas here – in Montmatre, 49 Rue Gabrielle. City life and the works of Toulouse-Lautrec influenced his work during this period.

Back in Madrid, Picasso published the art magazine “Arte Joven” as an illustrator together with the writer Francisco de Assis Soler.

When he returned to Paris, he found his first art dealer in Pere Manach and his first gallery owner in Berthe. The publisher Amboise Vollard is showing his works for the first time in an exhibition – the pink and blue periods are on display.

In 1910, Picasso painted his patron Vollard in a well-known Cubist painting.

Picasso’s artistic career began with works from the “Blue Period” (1901–1904) and the “Pink Period”. Picasso founded Cubism together with the artist Georges Braque (1908-1914). The “analytical phase” of Cubism lasted until around 1912 (portrait of Vollard – 1910) and then passed into Picasso’s “Synthetic Cubism”. The “Papiers collés” were created in the transitional phase (from 1912).

Picasso exhibited in 1910 at the “Neue Künstlervereinigung München”, at Herwarth Walden’s gallery “Der Sturm” in Berlin and in 1912 at the Sonderbund in the city of Cologne. At the same time, 4 works by Picasso can be found in the Blue Rider/Blaue Reiter exhibition in Munich. And in London he took part in the show “Manet and the Post-Impressionists” with drawings, paintings and prints (1910 and 1912).

… including the Minotaur motif and the artist and model theme. Since 2001 a complete series can be found in the „Pablo Picasso Graphics Museum“ in Münster.

The theme of the bullfight combined with the Minotaur myth pervades Picasso’s entire work. In his „Minotauromachy“ Picasso quotes Francisco de Goya. The “La Tauromaquia” series from 1957 contains 26 aquatint etchings that serve as illustrations for the bullfighting textbook.

In 1949 he made lithographs again, whereby Picasso revisited a technique from his artist years from 1919-1930.

By the way, in 1949 Picasso designed the dove motif as a peace symbol for the World Peace Congress in Paris – which is still used internationally today …

In 1968 Picasso devoted himself to different series of etchings:

Picasso’s work can be found in well-known museums and collections around the world:

Two museums were dedicated to Picasso’s artistic genius during his lifetime:

You are welcome to contact us if you are looking for or want to purchase works of art by the artist Pablo Picasso.

For further positions by Pablo Picasso in the Galerie Jeanne