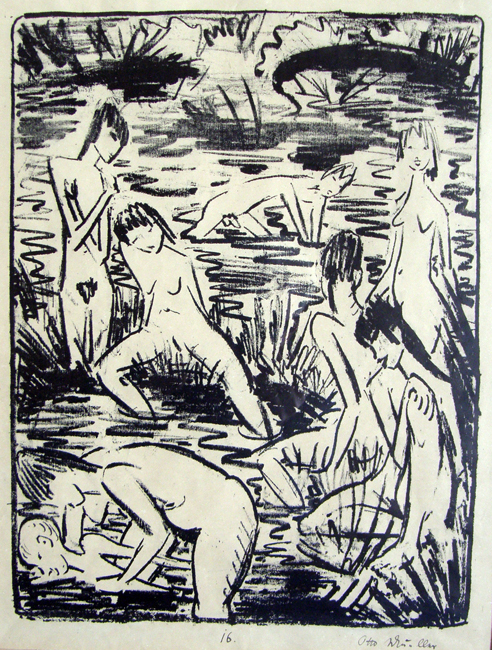 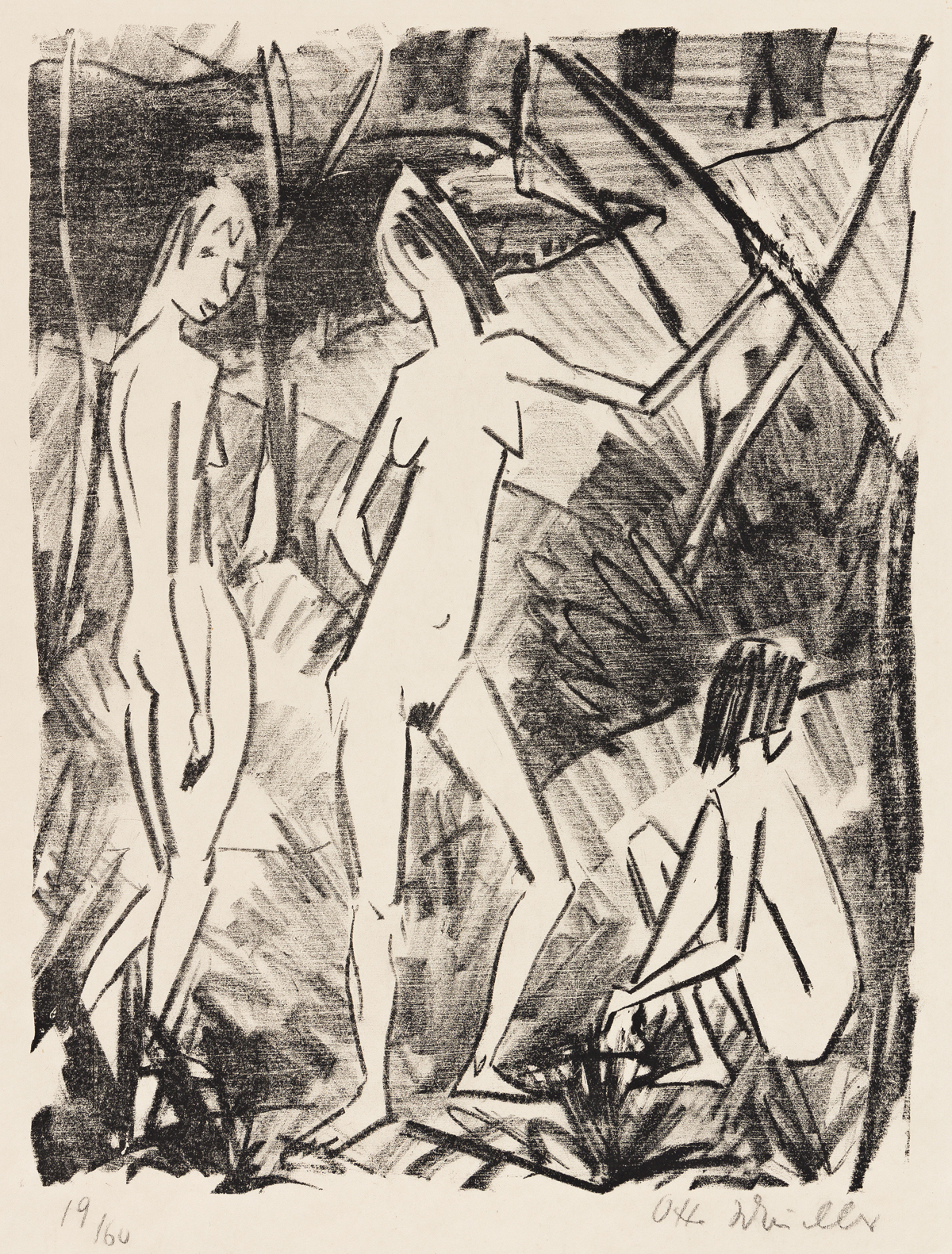 With an artistic work by Otto Mueller, you acquire the work of one of the most important German expressionist artists.

His nudes stand in the harmonious interplay of human being and nature.

Otto Mueller’s artistic career began with his apprenticeship as a lithographer in Görlitz (from 1890 to 1894).

Two years later, Mueller went to the Dresden Academy as a student with a special permit.

He traveled to Switzerland, visited Italy with Gerhart Hauptmann and got to know Munich. There he took up studies at the “Royal Academy of Fine Arts” in 1898/99. And it was none other than Franz von Stuck who withdrew his study permit. He could not tolerate Otto Mueller’s self-corrections and is classified as untalented by the artist prince.

Back in Dresden, he planned his trips to the Sudeten Mountains in 1899 and continued his self-taught education from 1900 to 1903. From 1906 to 1904 Mueller was with his artist friend Gerhard Hauptmann and met the painter Paula Modersohn-Becker.

Otto Mueller’s first wife, Maschka (Maria Mayerhofer) often served as the artist’s model from 1905 and remained friends with him even after the separation in 1921 – two more marriages followed.

The important years in Berlin begin in 1908 for Otto Mueller.

He met Wilhelm Lehmbruck and Rainer Maria Rilke in the literary circle (Fischer-Verlag). The Gurlitt Gallery devoted a first solo exhibition to Mueller in 1910.

Together with his artist friend Emil Nolde, the Berlin Secession rejected the exhibition of his works in 1910.

Max Liebermann was not without ridicule, who railed against “Expressionism” as “only the title is good”! Liebermann stayed away from the style.

In an art exhibition dedicated to those rejected by the Berlin Secesision, Otto Müller made friends with Erich Heckel, Ernst Ludwig Kirchner and Max Pechstein and became an active member of the artists‘ association “Die Brücke”. In 1911 Mueller and Kirchner worked together in Max Pechstein’s studio.

Otto Mueller discovers abstraction! From now on he concentrates even more on the essentials.

His paper works, which are in demand with collectors today, and his graphic work impressively show the charm of this characteristic form of representation.

Otto Mueller was one of the artists of the „Brücke“ in Berlin.

In 1913 Otto Mueller exhibited together with the “Blauer Reiter” for the first time.

The artist group „Brücke“ was dissolved. All remained in friendship.

During the First World War

Otto Müller served in France and Russia in the infantry. In 1917 he was exempted from active military service for health reasons (he had pneumonia).

In 1937 works by Otto Mueller were shown in the exhibition “Degenerate Art” and thus defamed.

After the end of the war (World War I)

Otto Mueller went to the „State Academy for Art and Applied Arts“ in Wroclaw. Here he held a professorship alongside Oskar Schlemmer until his death in 1930. Otto Mueller was on the board of the „First German Association of Artists“/„Erster Deutscher Künstlerbund“.

Otto Mueller’s impressive works of art were exhibited posthumously at documenta I in 1955 (Kassel – Germany).

Otto Mueller’s works are exhibited in numerous collections and museums: