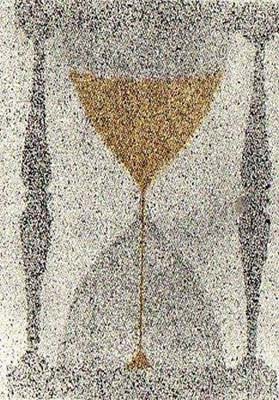 The American artist Edward „Ed“ Joseph Ruscha became internationally known for his prints and paintings. His work has shaped the Californian art scene to this day and has helped it achieve international fame since the 1960s. As a filmmaker, photographer, graphic artist and painter, Ed Ruscha gained a worldwide reputation.

It all began in 1956 when Ruscha began studying at the Chouinard Art Institute (Los Angeles) – now the California Institute of Arts. As a trained graphic designer and photographer, Ed Ruscha places the overall impression of the layout at the center of his artistic work.

Ed Ruscha developed his own visual language as a photographer and has published numerous photo books since 1962. His recordings and works brought about a change in pop culture. As a later artist of the Beat Generation, Ruscha became an important pacesetter of the Pop Art movement with his works. As a younger artist, Ruscha perceives the older artists around Robert Rauschenberg, Jasper Johns and Andy Warhol, but also brings his own reality of life into his artworks.

Films, mass media and artefacts of his own urban life (petrol stations, company advertisements, logos or individual words) become pictorial means and linguistic images in his work. Color and form show how Ruscha tends towards concept art in his work.

Ed Ruscha’s works are inspired by pop art and conceptual art, but his influence on these styles and his generation of artists should not be underestimated. With the pictorial language of Pop Art, his conceptual working method becomes a new expression in the art world.

Ed Ruscha’s etchings, lithographs and screen prints are an important part of the artist’s oeuvre. They reflect the essential and accentuate his artistic visual language.

Galerie Jeanne is exhibiting the following signed and numbered etching by ED RUSCHA directly in downtown Munich (the gallery is only 300 meters from Marienplatz) – and is offering this artwork by Ed Ruscha for sale:

Ed Ruscha’s works are represented in major collections and museums around the world, such as the

2001 – Member of the American Academy of Arts and Letters

2004 – Honorary Member of the Royal Academy of Arts in London

2004 – Member of the American Academy of Arts and Sciences

The works of the American artist Edward „Ed“ Joseph Ruscha can be classified into the following styles: