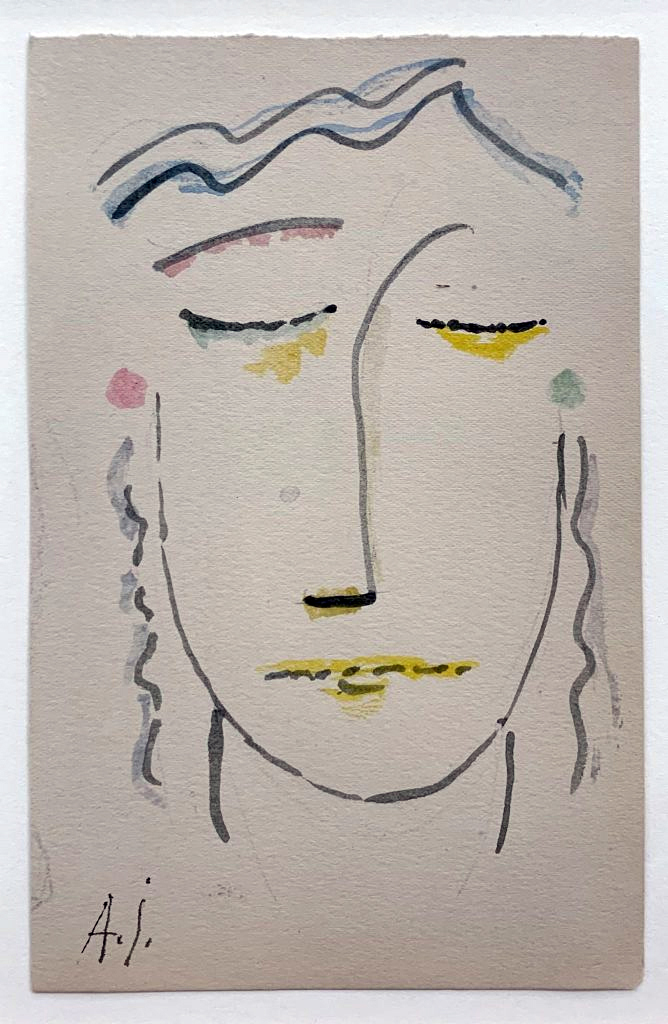 Watercolor and Pencil on hand-made paper
1920/21
16 x 10,3 cm
monogrammed at lower left
signed on the back side

When he saw his first art exhibition in the Tretyakov Gallery in 1882, he decided to attend the Repin Academy. In 1892 he also met the painter Marianne von Werefkin (1860-1938) at the Academy of Arts in St. Petersburg. She taught him oil painting. After all, the baroness and Repin’s pupil Werefkin was already known as the „Russian Rembrandt“ back then.

Alexej von Jawlensky moved to Munich with Marianne von Werefkin. It became a lifelong artist friendship in which Werefkin continued to train and encourage his talent.

The years in Munich and encounters that were to shape his work followed.

Encounters with Franz von Stuck, leaving the Azbe school, post-impressionism, pointillism and divisionism were to refine his handwriting. In 1903 he was in Paris and in 1904 and 1906 his works were on display at the Berlin Secession. Many encounters with contemporaries should train his perspective. The Munich Art Association from 1907 and not least the salon of Werefkin and Jawlensky in Munich’s Giselastrasse in Schwabing allowed the art scene to grow together here. Artists, writers, dancers and musicians from all countries met together.

In 1905 and 1906 the Salon D’Automne in Paris was an important exhibition venue for Jawlensky’s paintings.

Here he met the painters of the „Fauves“, who gathered around Matisse and shaped Fauvism.

At the same time, up until around 1908, Jawlensky was fascinated by the artistic languages ​​of Van Gogh, Gauguin and Cézanne. He traveled to Brittany and Provence and brought Vincent van Gogh’s „Road in Auvers“ with him to Munich.

From 1905 Murnau was a constant port of call for Werefkin and Jawlensky, as sketchbooks show. Together with Wassily Kandinsky, Gabriele Münter and Werefkin, Alexej Jawlensky came to life with colour.

The artist Alexej von Jawlensky worked in the circle of the artist group „Der Blaue Reiter“ together with Wassily Kandinsky and Franz Marc.

The artists around Alexej Jawlensky showed their work together in the “Neue Künstlervereinigung München”; alongside Kandinsky, Münter, Karl Hofer and many others, Alexej was one of the founding artists whose works were to be exhibited in Germany and abroad.

For further informations about Alexej von Jawlensky or if you have any questions please do not hesitate to contact us.